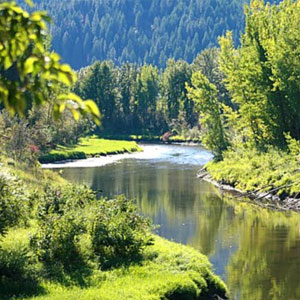 When peace, like a river, attendeth my way,
When sorrows like sea billows roll;
Whatever my lot, Thou has taught me to say,
It is well, it is well, with my soul.

The opening words of “It Is Well With My Soul” have ministered to generations of believers. They speak to the eternal hope that all believers have, no matter what pain and grief befall them here on earth. The story of how and when they were written is both a challenge to us to examine our faith, and an encouraging reminder of the joy and comfort that are in Christ even in the worst of circumstances.

In the mid-Atlantic ocean, the ship’s captain called one of his passengers to the bridge and said, “To the best of my calculations, Mr. Spafford, this is where the tragedy occurred and your four little daughters were drowned.”

Weeks earlier, Horatio Spafford had planned a family trip to Europe in November 1873. Business affairs delayed his departure, but he sent his wife and four daughters to France on the ship as scheduled with a group of friends. In mid-ocean, the Ville du Havre was struck by another ship and, in only twelve minutes, disappeared under the waves. Mrs. Spafford was one of the survivors, but the four little girls perished. She sent him the now famous telegram, “Saved alone.”

Now on board the first possible ship out of New York, Horatio G. Spafford stood on the bridge contemplating the loss of his girls. He stayed there for some time and then went to his cabin and wrote the poem that begins “When peace like a river attendeth my way.”

Sorrow and tragedy were no strangers to the Spaffords. The 1871 Chicago fire had wiped out Spafford’s extensive real estate holdings on the north shore of Lake Michigan. Undaunted, they devoted countless hours to helping the survivors. Then in 1880, their four-year-old son, Horatio, had died of scarlet fever. After the shipwreck, some members of the Presbyterian congregation to which the Spaffords belonged maintained that some sin in their lives had caused all these tragedies. The opposition grew until finally the Spaffords were asked to leave their church.

With unwavering faith and trust in God, they departed. Long interested in biblical archaeology, Spafford, along with his wife and several friends, settled in Jerusalem in 1881. They became part of the life and culture of the Middle East and were referred to by the people in the community as “the American colony.” After Spafford’s death of Malaria in 1888, his daughter, Bertha Spafford Vester, led the group to establish the American Colony Hotel, which has provided a welcome oasis for travelers to Jerusalem for more than a century. What a fitting tribute to the one who gave us these words to sing:

When peace, like a river, attendeth my way,
When sorrows like sea billows roll;
Whatever my lot, Thou has taught me to say,
It is well, it is well, with my soul.

Though Satan should buffet, though trials should come,
Let this blessed assurance control,
That Christ has regarded my helpless estate,
And hath shed His own blood for my soul.

My sin, oh, the bliss of this glorious thought!
My sin, not in part but the whole,
Is nailed to the cross, and I bear it no more,
Praise the Lord, praise the Lord, O my soul!

And Lord, haste the day when my faith shall be sight,
The clouds be rolled back as a scroll;
The trump shall resound, and the Lord shall descend,
Even so, it is well with my soul.